I decided to start another project. 😀 This is a really easy way to make mead, it’s also incredibly inexpensive which is an even bigger plus. My husband works out of state and one of the things he decided to try in the evening was brewing mead. He found this wonderfully easy method and this evening while he was home, he showed me how to do it (finally!).

Here’s a couple of pictures of the things you’ll need. Most of it you can find in your local supermarket, but my husband purchased the brewing sanitiser from a brewing shop in St. Louis, MO. 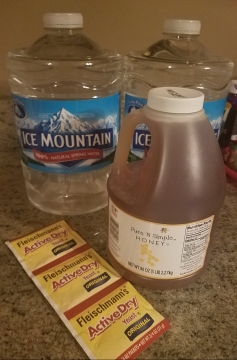 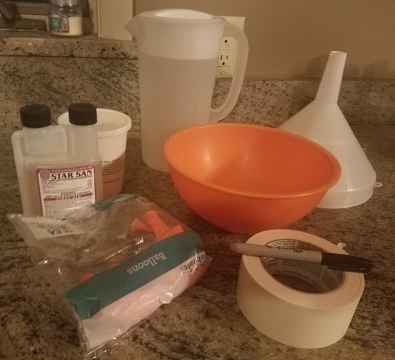 I told you it was really inexpensive, right? 😛 Balloons and masking tape. X) Haha! It cost us less than $15 for the honey and only a couple bucks for each of the waters and the yeast. The Star San brewing sanitizer is $12.66 for an 8 oz bottle, and the bowl, tape, pen, jug and funnel we had around the house.

First thing first, sanitise everything. In the picture there are two types of sanitiser, but we only used the Star San for this. Mix 1 oz of Star San with five gallons of tap water. Usually you use the mixture in a spray bottle and spray everything, but I didn’t have one so we soaked everything in it instead. You leave it wet for at least a minute then let it air dry. Afterwards, you’re ready to brew! Here’s some pictures of my husband sanitising stuff, because I like it when he cleans, haha!

Next, pour about two thirds of the water into your jug. Put the jug to the side because you’ll need it for later. Insert your funnel into the bottle and pour about 2.5 lbs of honey in. (I accidentally poured 2 lbs in the first jug of water and the remaining 3 lbs in the other but yeah.) 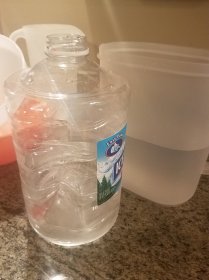 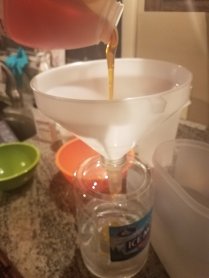 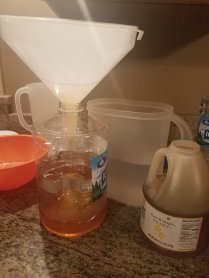 Put the lid on your honey-water and, as my husband so eloquently put it, “shake the sh*t out of it”. You want to mix the honey and water as well as you possibly can. After shaking, open it up, pour a whole packet of active yeast into the mix, add the water you previously set aside, but be sure not to fill it up to the top, leave a couple inches empty. Add the balloon to the top, nip a little hole in it to allow some air to escape. The balloon will inflate and the hole releases some air to ensure the balloon doesn’t go flying off. And voila! Mead done! 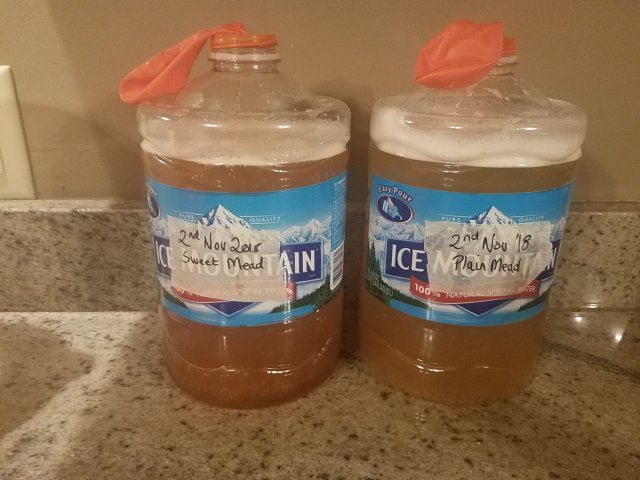 The “Plain Mead” bottle is the one I poured 2 lbs of honey in, the “Sweet Mead” has 3 lbs of honey. I’m assuming the 3 lbs honey mead is going to be much sweeter. 😛 After two weeks of fermentation, it will be ready to siphon into bottles, I’ll update in two weeks and let you know how it goes and, more importantly, how it tastes. 😉

So it’s been a lot longer than two weeks. 😛 I’m finally updating though! So I gathered up my things, two bottles, my Star San brewing sanitiser, siphon and huge silver pot. 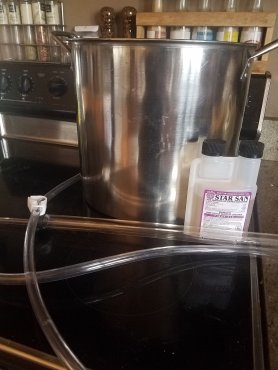 In the massive pot, I put five gallons of boiling hot water and 1/4 oz of the Star San sanitiser. I dunked the two bottles into the water, made sure they were covered and filled. Then I poured the water out and set the bottles on the draining board for the remaining liquid to pour out. Then I did the same for the siphon, then pumped the rest of the sanitiser water through the siphon.

Unfortunately I didn’t take pictures of this part of the process. After all the sanitising was done and everything was ready, I popped one bottle on a stool on the ground, and grabbed my first bottle of mead (the sweet mead) and kept that on the counter. I removed the balloon, put the pumping end of the siphon into the bottle WITHOUT TOUCHING THE BOTTOM. It’s very important not to touch the bottom, otherwise you’ll suck up the sediment. My youngest child, Romilly, helped me by holding the other end of the siphon inside the bottles, so it wouldn’t fall out. 😉 I did the process for both jugs of mead. It was very quick, the disinfecting took far longer than the siphoning itself. 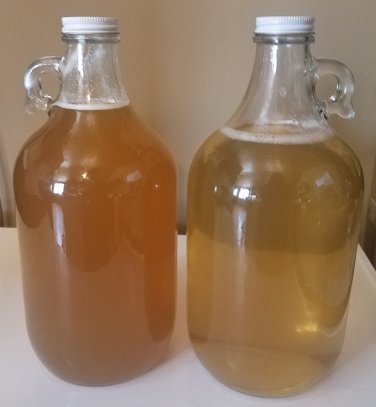 Ta-dah! The fruits of my labour. 😛 On the right is the sweet mead, on the left is the plain mead. Now the important part, TASTE! Obviously I took a taste test immediately after I’d bottled them. The sweet mead was delicious, it tasted like pure honey with a subtle alcohol aftertaste. The plain mead … was awful. Unfortunately I think it soured during the brewing process, it tastes terrible, like pure alcohol and tart as hell. Still, at least one bottle came out drinkable (and delicious!). I’ve popped it in the fridge and I’m excited to have a nice cold glass tonight after the children have gone to bed. 😀